CES has been coaching tourism officers, entrepreneurs, managers and Community Leaders in sustainable tourism development for over 15 years! The tremendous success of this program and it’s ‘graduates’ has been incredibly rewarding for not only the communities they work in, but for our team as well. We have been given the wonderful opportunity to forge strong working relationships as well as friendships. This is why we have decided to start a ‘video coaching series’ by the man who started it all – Clinton Belcher – and we would like to invite you to participate. Clinton will be providing advice and tips on developing your skill set as well as innovative ideas and concepts for sustainable tourism development. We will be starting the series in the coming weeks – keep an eye out on our facebook page, twitter, blog and YouTube channel for details and videos!
No comments:

The Assembly of First Nations (AFN) National Youth Council (NYC) is planning to hold the 4th National Youth Summit: Youth Leadership Supporting the Way Forward, in the Summer-Fall of 2012. For the RFP, visit - http://www.afn.ca/uploads/files/rfpafnnycannualconference.pdf

Through a collaborative process, CES has been working with the community of Nemaska in Northern Quebec in developing their community into an international destination. CES was hired to facilitate the training and coaching program for the community’s Tourism Officer. Subsequently, a Pando Terra Community Tourism Plan was developed in consultation with the community. The plan provided a holistic approach to sustainable community development, ensuring long term success. The plan detailed tourism opportunities highlighting the community’s unique culture and history, and provided recommendations for their implementation. CES continues to work with the community, developing a variety of marketing initiatives, including a brochure, website, community signage and luggage tags. 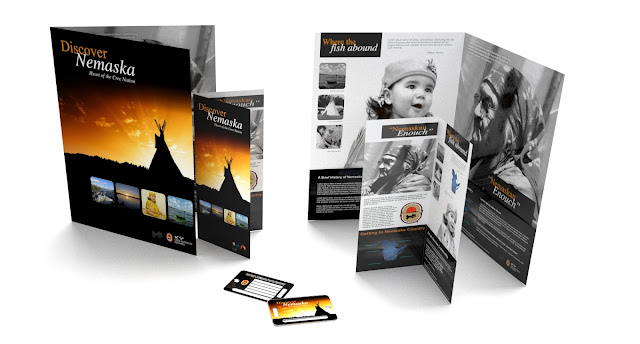 The goal of the Aboriginal Tourism Ontario Strategy – Phase 1 was to listen to the voices of Aboriginal tourism business in Region 13A and objectively assess their current state. A categorized inventory of Aboriginal businesses representing a cross-section of tourism sectors was developed. Through a comprehensive stakeholder engagement process, the main challenges, opportunities and recommendations were identified and assessed. Phase 1 identified opportunities for product development, training, a cultural authenticity program and marketing and packaging. Phase 1 recommended moving forward with an Aboriginal Tourism Ontario organization.

Phase 2 saw the development of an operational business plan for Aboriginal Tourism Ontario and was built on the strategic priorities identified in Phase 1. This included developing an effective management structure and organizational framework for the provincial organization. An implementation plan was developed for the four directions the organization is built on including product development, human resources, cultural authenticity and marketing and branding. The mandate of Aboriginal Tourism Ontario will be to support, recognize and market Aboriginal tourism businesses and communities in Ontario and grow the tourism receipts of Aboriginal businesses.
No comments:

The Footsteps & Paddle Strokes project was designed to create a tourism strategy that would unify a region through the development of complementary tourism products in harmony with a cohesive branding strategy. CES designed a process to develop Eeyou Istchee - the James Bay Region of Northern Quebec - into an international tourism destination through a collaborative approach consulting with industry partners community members, key stakeholders and funders.Once complete, the findings from these extensive consultations were compiled and recommendations put forth to best reflect the interests of the community members. A comprehensive plan was developed to ensure COTA’s vision of creating a dynamic regional tourism plan that linked 9 Aboriginal communities through thematic cultural & arts routes with appropriate programming. The result is a uniquely stakeholder-driven blueprint for regional tourism success.

The WOW Project, a component of the Regina Downtown Plan, plans to expand Victoria Park into a focal point and festival space for downtown Regina. The project has become a reality in City Square. A significant element in the City Square project was to consult and inform those people who will be the park users once the project is completed. CES engaged in an extensive stakeholder consultation process termed WOW2 with the objective of:

“Helping us to make better decisions about expanding Victoria Park into a vibrant city square.”

The purpose of the stakeholder consultations was to inform, consult, listen and learn. The stakeholder consultations occurred in two rounds. The first round methodologies included random surveys, one-on-one meetings, formal and informal meetings, telephone interviews and web-based surveys to identify their opportunities, challenges and recommendations. The second round methodology consisted of numerous roundtable discussions to confirm what was heard during the first round and to develop the program of uses for the park.

108 various stakeholders were engaged during the first two rounds of consultations, which included:

Hundreds of stakeholder comments were received during the first rounds of consultation, which were analyzed and categorized into recurring topics. The recurring topics were further distilled into 11 common themes. From these themes, 4 pillars were developed to serve as guiding principles in the design, expansion and end use of City Square. 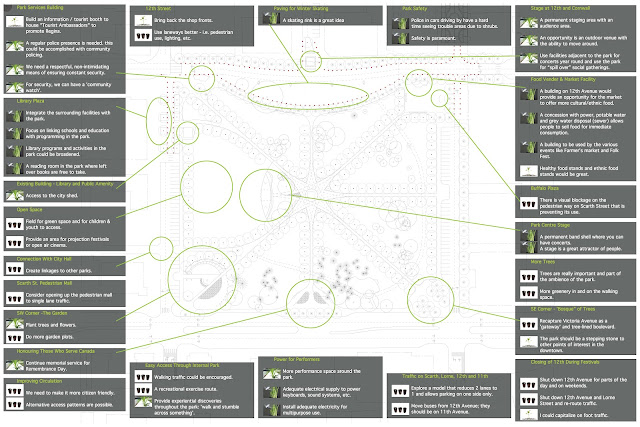 The stakeholder consultations culminated in a final public viewing and neighbourhood celebration in Victoria Park. The neighbourhood was invited to Victoria Park to view the various components of City Square including the stakeholder consultations, traffic and transit and the conceptual design plans for City Square. People in attendance were given the opportunity to provide feedback of the event and the project to date. The event was very well received and attended with over 400 residents of Regina attending.

The stakeholder consultation process was an integral part of the City Square project as it provided a forum for which stakeholders could voice their opportunities, challenges and recommendations for the park as it related to them. It provided a context for which the citizens of Regina could help create a park that will become the jewel of downtown.
No comments:

Engaging Youth in a Creative Way

After watching a few Ted Talks for inspiration, I am beginning to realize that the possibilities to engage youth for educational purposes using mobile technology are endless. 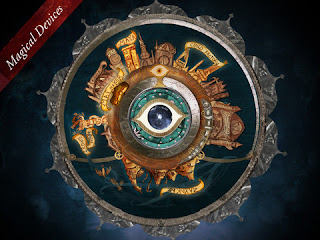 Shilo Shiv Suleman’s Ted Talk on ‘using tech to enable dreaming’ introduced Khoya, her new interactive storybook for iPad that links magic, earth and technology to share a story about contemporary India. She saw the iPad as an interactive storytelling device that has the ability to create a multi-sensory experience for users and since it is location-based, can connect people from all over the world. The Khoya storybook uses mobile technologies such as Augmented Reality and GPS to create interactions that make the reader actively seek out natural environments. It triggers children’s imagination by making them the main character in the story and assigns them simple tasks such as taking a picture of a tree or a flower and adds it to the story. Khoya takes traditional storytelling to a whole other level. 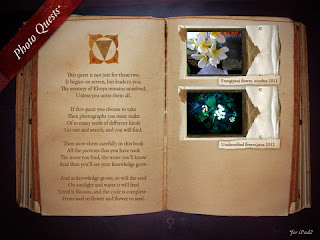 New and exciting games and apps on mobile devices create endless opportunities for creating personalized educational experiences for youth. The mobile device has the ability to encourage youth to go out and explore their environment, take photos, take videos, conduct interviews and record data.

CES is constantly looking for new and innovative ways to engage youth, in particular indigenous youth, to promote and preserve their culture and environment. We’re approaching a very exciting time for innovation and using technology to educate, inspire, and motivate today’s youth to make a difference in their community and the world.

If you are interested in exploring the possibilities call me at 1-877-444-5550 or email at amanda@cesclients.com.
No comments: